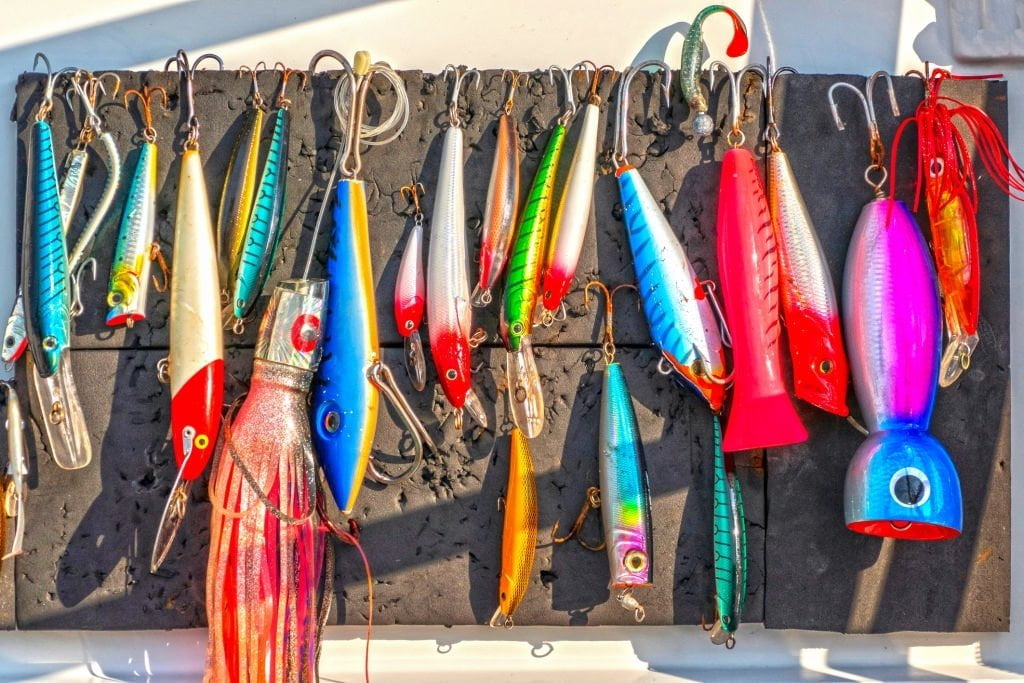 They’re the most basic of all the lures, and they get their name from the fact that they resemble the head of a spoon. They perform a flickering and wobbling movement or motion for the baitfish. Spoons are ideal for beginners in lure fishing since they are simple to use and inexpensive.

The spinner is essentially a blade that rotates on a spindle when recovered or returned through the water and emits a flash as light is reflected on the revolving blade, defining the scales and motions of the baitfish. This is a versatile lure because, in addition to being able to check and know the retrieval depth by the amount of time one leaves before starting a retrieve, one can also change the pace of the rotating blade around the spindle by speeding up or slowing down one’s retrieve. Therefore, a smaller size is advised for the Trout and Mullet and a larger spinner with the pike like and a treble hook in red wool.

These lures are used on the water’s surface and are regarded as the most exhilarating of all lures since one can see the fish take the bait, and the suspense and expectation of waiting for the take are incredible. When the fish sends off at a surface bait, they may be seen escaping the water. Because these lures are recovered from the water’s surface, they might be an excellent choice in places with a lot of weed.

Plugs that are suspended

When the plug has plunged or fallen to the appropriate depth and is left alone, it will remain suspended at that depth because of its neutral buoyancy and resistance. As a result, this kind is ideal for following prey hidden among weed beds, rocks, or banks. Conversely, when the plug is jerked to mimic life, it generates a crashing strike from your target.

Drivers who can float

They’re a must-have for all lure fishermen since they cover a wide range of diving depths, from just beneath the surface to fifteen feet or more. The diving centre is determined by the distance between the vane or fin and the lure’s body. The shallower the angle to the lure’s body, the deeper it can sink. The form of the vane and the size of the lure’s body all contribute to the plug’s movement in the water.

These are ideal for deep-water fishing, as the retrieve may begin as soon as the desired depth has been achieved. This is achieved by starting the retrieval procedure by counting down. As a result, every time one cast, the same depth will be achieved. The sink rate of the lure refers to how far down the lure has sunk in a given amount of time, which indicates how deep or far down the fish are when they strike.

This is a soft rubber bait that comes in various shapes and sizes, as well as matching colours and sizes. These are frequently employed for both saltwater and freshwater fishing and may be used on a weighted jig head in the same way as jerk bait is or controlled like a plug.

The angler adds life to this lure because it has no movement on its own in the water; if the rod trembles, shakes, or jerks, this lure might appear to have life. This lure is designed to seem like an injured or wounded fish, which prey fish will be driven to thrust or lunge at.